What would I ask my cat? 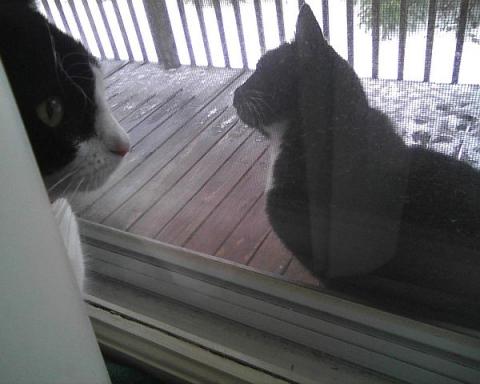 10 Questions I Am Dying to Ask My Cats - by Emma Sarran http://disq.us/8m2fpg

Parker was born in the shed to a feral mother. Her grandmother was abandoned by a former tenant of the house. About a year after she was born, she left the shed, but I continued to feed her. About four or five months after that, she became an inside-only cat.

Would you like to have another cat?
She left when the spring kittens were born. I had another cat for about a week (the vet was offering him to me as a foster; he now lives at the vet clinic). I think she would like to be an only cat, but I would like to know for sure. When they lived in the hay, there were times she would wait until her nephews were done eating then come eat where I was sitting.

Do you like being an inside cat or an outside cat better?
When she was an outside cat, she got to chase mice and birds, but on the other hand, she had to. She got ticks and chiggers when she was outside, and did not like it when I took the ticks off; I trim her claws, change her collar, and the occasional dose of flea medicine now that she's inside. She has warm places to sleep, but not as many places to run and climb.

Would you like to go outside?
She can see other kitties out her window. Some of them live next door; one lives outside all the time. I wonder if she wants to go out there.

What did you do that week I didn't see you?
Shortly after she left the shed, there was a week where I did not get up early enough to feed them, and Parker was gone before I got there. I did not see her all week until one morning she came up the hill. I wonder what she did that week... where she went... what she ate. I even wondered if she had wandered off to the end of the road.

What do you think of Midge and Kitty?
Parker travels with me when I spend a week with my parents (for the holidays, somebody's birthday, etc.). I sometimes let her out into the house, supervised, so she can explore and meet Midge and Kitty, the cats who live inside all the time. The last time, Kitty mrrrped when he saw her, but Midge hissed.