You were found in 1996 when they thought you had been hit by a car. A nice vet took you in and took care of you. She made sure you lived a nice long life. You lived at the clinic rather than at home, but you got to meet lots of animal lovers. And a few dogs.

The first time or two I visited the clinic in 2012 and maybe 2013, you were hiding in the back, like old kitties have a right to do. Ranger was more famous anyway, and friendly enough. Then I came in and you were at the front counter. I did not know about your bad hip, and I petted you down a little too far that day. You let me know with a Mrow! and a swat.

The next time I saw you, I petted you again, but stopped before I got to your hip. You liked that, and then you would let me pet you. I would come in to see the kitties, and you would say hello to me before I could say hello to the humans who worked there. Then you would come up to me and ask why I wasn't petting you yet. Well, Mercy, I had to get in the door first. One day you saw me walking outside the window, and you got up to the counter to wait for me. The techs wondered what you were doing.

Sometimes, you were asleep in your bed in the corner when I found you. I would wait until I saw you woke up before I started petting you. I would also sometimes turn your electric blanket back on if it had shut down.

You were getting weary of being in pain and being the cat Ranger always picked on. Then the vet found a veterinary acupuncturist, and Prince Valiant the kitten (now known as Binx) came to pick on Ranger after I wouldn't let him pick on Parker anymore. You had new life for a few more years. You still weren't a big fan of getting up on rainy days, however.

When I would drop off Parker while I was getting gas before heading back to the farm, you would sometimes say hello to her as she sat in her cat carrier. I did say hello to you when she had an appointment, but I could not stay as long on those days.

There was the one time when I was petting you while the nasty dog had to leave the exam room to go home, so they let me go into the back room with you until he left without seeing us. There were other times I would wait, talking to the vet techs so you could hear that I was there, and then you came up to see me. There were times when you spent an hour on my lap -- although sometimes, it took you half an hour to sit down. You didn't like the other clinic cats (or patient dogs) getting too close. If Binx was looking at you from across the room, that was too close. If Ranger was sitting on my other side, that was okay until you turned around and saw him; once you did, he had to leave.

It was a good thing you lived at the vet. You had some conditions that required lots of medications, and vet techs have more access and patience for that sort of thing than the general pet owner. I remember a couple of times I was there early enough that you were still eating your breakfast. It smelled like stinky cat food, but you liked it. Sorta. Sometimes they had to rearrange it so you would finish it or take it away before you did.

Then you decided it was time. You stopped eating and taking your medicines. You didn't come to see me, but once they carried you to me, you came from the other end of the waiting area couch to me so I could pet you, and came up on my lap.

You were purring that last night, but it didn't sound like your usual purr. It was a little wheezier than usual. The second to last night, you purred and I tried to get a recording of it on my phone. I also took a picture of you on my lap. Your eyes didn't look as bright as usual, but I thought it might have been the early evening darkness. They decided to put you down on Wednesday of last week, and you were about ready. They sedated you, but it wasn't much difference. 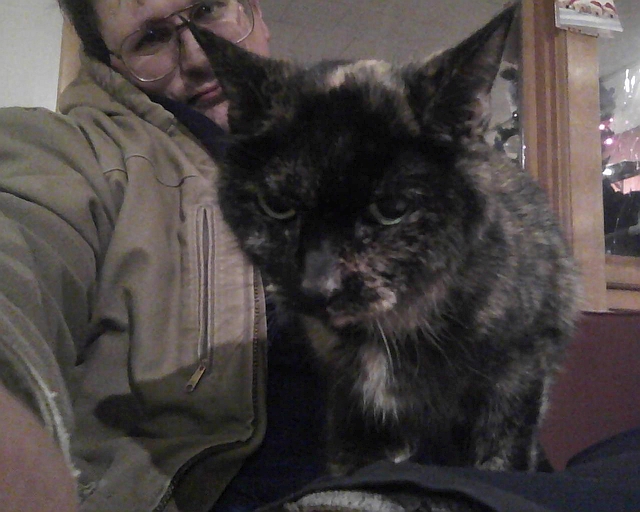 I knew you longer than I had Butler. Although you were never officially mine, you were still my second favorite cat behind Parker. Say hello to Butler and Sandy at the Bridge (and Friendly too, if you see him). It was definitely different sitting on the couch with Ranger and seeing your picture on the pet memorial tree instead of the real you. I'll have to be sure to go to the memorial service this year. 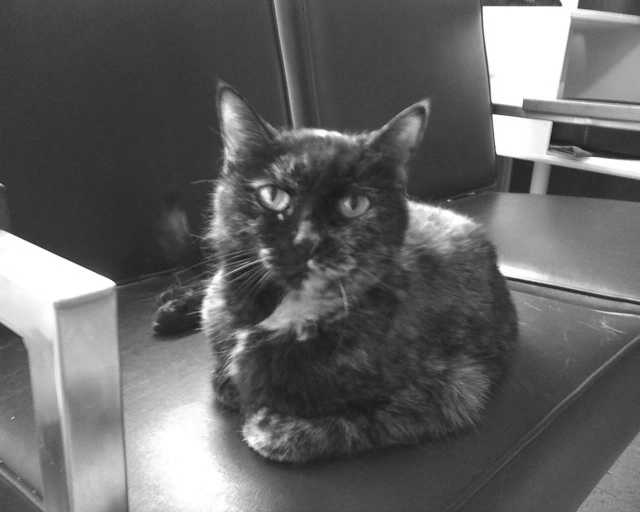